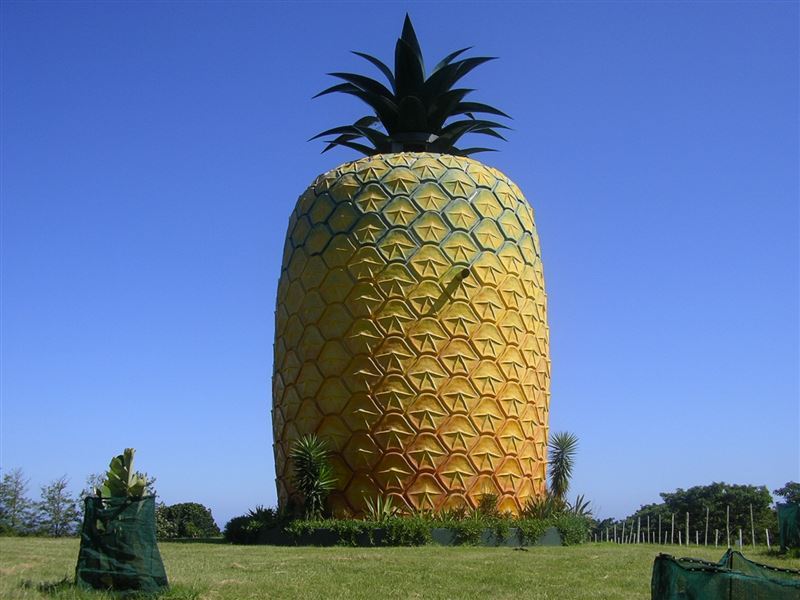 Standing at 16.7 metres high and featuring 3 floors and an observation deck, The Big Pineapple is considered to be the largest artificial pineapple in the world. This iconic structure was created by members of the agricultural community in Bathurst. The story behind this massive structure is that it was constructed between 1990 and 1992 on Summerhill Estate, after a few local farmers went to the beautiful sunshine coast of Australia, saw their Big Pineapple and decided to take the idea and make it bigger and better.

Constructed out of a fibreglass outer skin that covers a steel and concrete superstructure, The Big Pineapple soon became a major attraction in the Eastern Cape.

Upon arrival at the Big Pineapple you will enter on the ground floor into a gift shop full of pineapple goodies ranging from Pineapple jams and chutneys, locally made pottery and key rings as well as t-shirts and hats to name but a few of the items on sale, ideal for local and international visitors looking for a small souvenir to take back home.

The first floor provides tourists with information and static displays of the Pineapple Story. This ranges from how they first derived in Bathurst to how they are harvested. Head up to the second floor which consists of a 60-seater auditorium and watch a mini-documentary on the Eastern Cape pineapple industry which includes showing you how pineapples are cut and segmented into different forms of canned fruits. From here head to the third floor which is an observation deck offering magnificent 360-degree views over rolling farmlands where pineapples sprout; to  the warm waters of the Indian Ocean.  If that’s not enough for you, you can always jump onto the back of a farmer’s tractor and ride through the Pineapple fields to get a close-up glimpse of this popular subtropical fruit.

What’s exploring without a fruity sundowner? Just minutes away, stop off at the oldest pub in South Africa, approximately 170 years old, and enjoy a pineapple cocktail while the kids run freely on the lovely expanses of a pineapple experimental farm.

The Big Pineapple is found on the outskirts of Bathurst, just off the R67. It’s open from Monday through to Sunday from 9am to 5pm, however, during winter it closes at 4pm.  It costs R10 for adults and R5 for children. Take a snapshot of you standing beside the Pineapple to really appreciate the size or capture the scenic beauty of the area from the observatory deck. Either way, you should definitely take your camera along!

View all posts by FG

This site uses Akismet to reduce spam. Learn how your comment data is processed.